The Rocks are situated on the hill of Rocks to Villemonteix. The locals say that the Virgin Mary had carried them in her apron.

See the map of hiking trails in Cheissoux

At the top of a hill dominating the village of Villemonteix, we notice two enormous rocky masses which in the region we call “The Rocks”. We claim that it is the Virgin Mary who brought them in her apron, and there is a track of her steps and the engraved form of the “cradle of the baby Jesus”. The place is disreputable. These rocks were of used for a long time as a den to a wolf that caused many casualties in the country.
(Denise Roux)

It is also said that a white horse hides from it. This horse goes out only at night, to go to drink in a small fishery which is by the roadside and to satisfy hunger with the sweet grass which grows all around. It is dangerous to meet the animal, which pursues the travelers until they are completely exhausted.
(Denise Roux)

According to Mr Servaud who lives in Villemonteix and who was a mayor of Cheissoux from 1945 till 1971, these are the rocks on which the druids were in the habit of sacrificing their prisoner by opening a vein.
(Guy Roger)

Concerning these rocks which we also call the “Rocks of Narfouilloux”, the narrator tells this other legend that is passed on from father to son in the family :

Once the people were taken prisoner by barbarians. In order to obtain their deliverance, they appealed to the devil who made a commitment to release them, on the condition of giving up their souls at the end of one year. The bargain having been concluded, the devil returned these men to Narfouilloux and freed them. But it seems that the devil never sleeps, so that for him, the night counts as much the the daytime, so that after six months, believing the time elapsed, he came to demand the prize of his intervention. Naturally, the prisoners did not take the same view and tried to make the devil understand that it remained another six months to run. But, the devil insisted that the parties agreed to submit the dispute to the priest of Bujaleuf. The interview took place on Maine, a hill which dominates the valley of Maulde. The priest who had come with his censer, began splashing the devil as soon as he saw him, the more the devil recoiled, the more the priest moved forward splashing his censer without stopping. Finally, to escape the priest, the devil had no other resource than flight and so the prisoners never heard about him again.

Religious version of the history of the Rocks of Villemonteix

Here is the religious version of the history of the Rocks of Villemonteix, told by Françoise Myrh, who held it from an old priest who had made him read this legend. 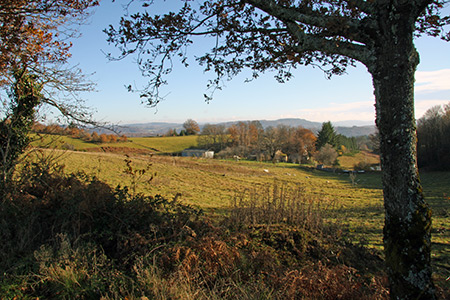 Like all mothers in pain, when the Virgin Mary saw her son expire on the cross, she remained a long time completely insensible, by means of suffering, and her reason wavered, such the reason of all the poor mothers amputated of their children. God felt sorry for this heart in distress: two angels descended from heaven and carried the Virgin by supporting her on each side, carrying her by flying, over hills, over valleys, over high mountains, to soothe her pain, to return her to the reality and to the truth which is calm and in the acceptance of all which happens to us by the will of the Almighty.

She thus traveled through Palestine and Central Europe, then arrived in a country of the west, a wild and fresh country whose lively air brought her out of her torpor and forced her to examine places. The wet grass, the green brooms, the crunching mosses, the pink heathers spread penetrating perfumes which, with the appeal of the big forest, incited her to rest and to enjoy a little of the sweetness and the freshness of the climate Lemovice. She asked to stop on a humble hill of low altitude, covered with pink heather and with prickly gorses. She gathered herself a little within this gloomy and melancholic nature and by joining the hands for the instinctive prayer, she noticed that she had taken two small pebbles which she had torn away by rolling about with pain over there on the Golgotha. She tells them by putting them on the ground and without thinking that they were sluggish and inanimate things: « – grow, grow small stones and give me the peace by relieving my pain. »

As soon as she had pronounced this vague formula, she saw the two small stones grow rapidly and form two enormous blocks of grey granite. Both angels, who had not left her, raised her to the top of rocks and what she saw, hypnotized her and charmed her. 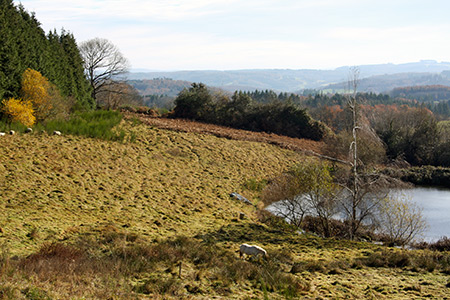 In a kind of excavation of one of the rocks, dug in the shape of a cradle or rather a manger, a pink small child with the fair hair was wailing and smiling… She gave a cry of anguished happiness, to which a soft and well-known voice gently answered: « – Do not cry it is me »… and then she cried, cried so much and so much that her tears dug and fill the other excavation which is in the form of a cauldron. And when she had cried, cried all the tears of her body, as the expression devoted to the pain wants, when she had well discharged her pain like all human beings… the small child who was only a myth regrettably, the little pink child disappeared from the cradle… but the consoled, grave and serene mother, resumed the path of her country in the same way as she had come by surrounding her a pleasant and soft charm which still persists and cradles the pains. A goatherd bringing back a band of wild goats and a hunter, carrying a roe deer on a sharp spear, witnessed the facts that I have just told you. 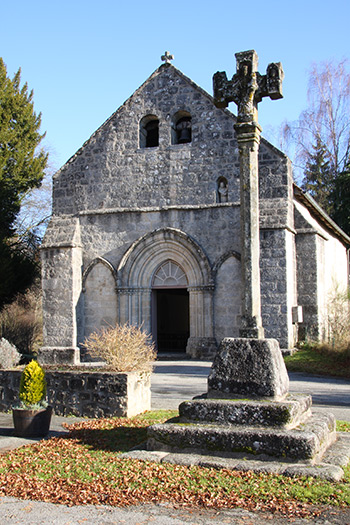 They helped to build the chapel which has been transformed and repassed many times since then), is still of use as church to the locality « Cheissoux-la-Chapelle », we can even see the absence of a bell tower, because it was not a real church. The goatherd who was not an artist, tried nevertheless to fix the features of the Virgin and the angels, and succeeds only in two unrefined statuettes, which still adorn the large granite cross which marks the entrance of the chapel, there, at the bottom of the small village of Cheisssoux. He did not want me to tell you his legend, because he preferred to live happy and hidden in the peaceful calm of his balmy air.

A statue of the Virgin thrones and decorates only the humble church of the village, formerly the brides concerned wore their bridal bouquet on the alter of Mary and received in reward at the end of the prescribed time, the small pink baby who had consoled the painful mother, I know that having abandoned this pious custom, they have no more so easily so beautiful children, nor as many children as the mothers of old.

I know nevertheless that down from her small chapel, the Virgin Mary smiles at them all, that she loves all their small children and reserves to the painful mothers the reassurance and the peace when they cried in his feet.